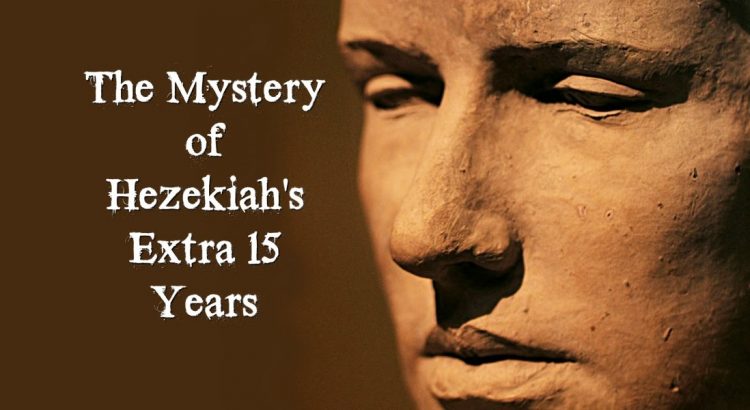 THE EXTRA TIME OF KING HEZEKIAH
King Hezekiah was one of the best kings of the kingdom of Judah who served and trusted in God without compromise, in fact he was described as the best king who trusted in God more than any other, even more than king David, “He trusted in the Lord God of Israel, so that after him was none like him among all the kings of Judah, nor who were before him” 2 Kings 18:5. The Lord was with king Hezekiah and prospered.

King Hezekiah was 25 years old when he became a king in Judah, and after he reigned 14 years, he was only 39 years old, then he became sick. The Bible says in 2 Kings 20:1, “In those days Hezekiah was sick and near death” A faithful and godly king was sick, a king who trusted in God more than any other king became seriously sick. We would be expecting God to do something, or say something, at least. Lo and behold, God said something through His prophet, a popular prophet Isaiah. But what God said was not what king Hezekiah was expecting or what we would expect. We would expect God to talk of healing, to send word of healing to Hezekiah, a king who served and trusted in God. Afterward, he was still young, just 39 years old.

God sent prophet Isaiah to king Hezekiah who was seriously sick, God said in the second part of 2 Kings 20:1, “And Isaiah the prophet, the son of Amoz, went to him and said to him, “Thus says the Lord: ‘Set your house in order, for you shall die, and not live.’”

WHAT? What kind of message is this?

Why would God let such a king like Hezekiah die? This alone could discourage many people from serving God, that trusting God does not make sense, at least, the man who trusted God more than any other even died at age 39, how can God allow a man who trusted in Him with all his heart just die like that at age 39? A man who walked before God in truth and with a loyal heart? Well, that was also the thought of king Hezekiah himself, the Bible said in 2 Kings 20:2-3, “Then he turned his face toward the wall, and prayed to the Lord, saying, 3 “Remember now, O Lord, I pray, how I have walked before You in truth and with a loyal heart, and have done what was good in Your sight.” And Hezekiah wept bitterly.”

King Hezekiah had good points here, he had truly walked before God in truth and with a loyal heart, and God can’t forget that, and also, that he wept bitterly, God can’t endure that. God can’t forget the good and godly works of His children and He can’t bear it seeing His loving children weeping bitterly.

“And it happened, before Isaiah had gone out into the middle court, that the word of the Lord came to him, saying, 5 “Return and tell Hezekiah the leader of My people, ‘Thus says the Lord, the God of David your father: “I have heard your prayer, I have seen your tears; surely I will heal you. On the third day you shall go up to the house of the Lord. 6 And I will add to your days fifteen years. I will deliver you and this city from the hand of the king of Assyria; and I will defend this city for My own sake, and for the sake of My servant David.” ’ ”

Because king Hezekiah prayed and wept bitterly before God, God gave him an extra 15 years, so he reigned for 29 years instead of 14 years God intended for him and he lived up to 54 years before he died instead of 39 years God actually planned for him.

So what happened in king Hezekiah’s extra 15 years? That is the main purpose of this message – the extra time of king Hezekiah – it was a sorrowful and most terrible thing that happened, and it was because God knew about that, that was the reason He wanted to take Hezekiah home before the evil days, but Hezekiah did not trust in God’s judgment, but he wept bitterly and cried to God to change His mind, and God answered him. But what happened to him in these 15 years became a great calamity and total disaster.

8 THINGS HEZEKIAH’S EXTRA TIME CAUSED?
At least 10 bad terrible things that happened as a result of Hezekiah’s extra time, that would not have happened:

1, All the good things and deeds that Hezekiah did for 14 years, his 15 years’ extra time destroyed them all.

2, all the good things that king Hezekiah’s fathers did in the land of Judah, from king David to king Uzziah, the extra time of king Hezekiah destroyed them all.

3, the beautiful temple that king David prepared and planned and that king Solomon built was destroyed because of the extra time of king Hezekiah.

4, the walls of Jerusalem that were built by many kings were destroyed because of the extra time of king Hezekiah.

5, the extra time of king Hezekiah gave birth to the death of so many people in Judah.

Hezekiah had an extra 15 years, meaning he was healed from the sickness and 3 years after he was healed, he had another baby boy called Manasseh. Hezekiah called his new born baby boy Manasseh, the name Joseph called his first born. The meaning of Manasseh is “God has made me forget entirely my troubles” but the devil changed it for him, instead of Manasseh to make him forget all his troubles, but rather he made Judah forget all about God and he made God forget all about Judah. Later after him, king Josiah served God to turn away God’s wrath from Judah, Josiah served God and pleaded for God’s mercy.

The Bible says, “Now before him there was no king like him, who turned to the Lord with all his heart, with all his soul, and with all his might, according to all the Law of Moses; nor after him did any arise like him.” That is 2 Kings 23:25. But do you know what the Bible says in verse 26?

“Nevertheless the Lord did not turn from the fierceness of His great wrath, with which His anger was aroused against Judah, because of all the provocations with which Manasseh had provoked Him. 27 And the Lord said, “I will also remove Judah from My sight, as I have removed Israel, and will cast off this city Jerusalem which I have chosen, and the house of which I said, ‘My name shall be there.’”

Manasseh made the people of Judah commit sins “which the Lord would not pardon.” And this is the same Manasseh God wanted to prevent? Could that be the reason God wanted to take Hezekiah to heaven earlier?

By God’s grace we will continue in the second part of this Bible study of THE EXTRA TIME OF KING HEZEKIAH.