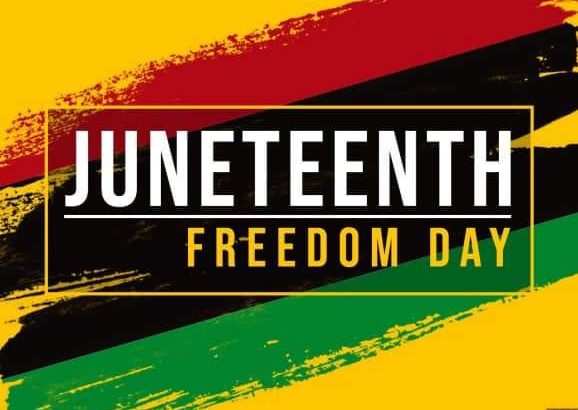 JUNETEETH (June 19th)
On June 19, 1865, tagged as Juneteenth by Black Americans then, the enslaved men and women in Texas finally learned that they were free — more than two years after President Abraham Lincoln signed the Emancipation Proclamation, which freed all slaves in rebelling states. The Black slaves remained in bondage by their slave masters for more than 2 years after their emancipation Proclamation.

Do you know same thing is happening to many people today? After Jesus saved and set you free from sin, the slave master devil will want to keep you in perpetual bondage of some sins called addicted sins, and deceiving many that you can’t be free from addicted sins just like that, and that you must remain enslaved or you will need special deliverance apart from the work of salvation. You know what? Jesus has paid for all and He has set us free from every sin, either addicted sins or general sins, we are free completely and we must not be slave of any sin. Do not remain under the bondage of masturbation, drug, lying or any form of sin after you are saved. Jesus has set us free indeed!

Secondly, do you know that some people say after they are saved in Christ and become a new creature in Christ, that Jesus only set them free from sins but not from principalities, powers of darkness, handwritten generational curse or evil forces of their families. They said after their salvation in Christ, they are still slaves of evil forces, though they are now seated with Christ in heavenly places but witches and wizards can still sit on their destinies, and there is need for additional declaration of freedom through special deliverance work maybe on mountain or somewhere apart from the declaration of their salvation.

They ignorantly say, “Your salvation in Christ has nothing to do with generational curses, and witches do not care if you are seated with Christ in heavenly, they can still climb on Jesus and come and meet you beside Jesus and sit on your destiny” They say, “Even if your life is hided in Christ when you become saved, hmmm, witches and wizards are very bad oh, they will break into Jesus’ stomach, take your life and destroy it. That is the reason you need continuous special deliverance, prayers of witches fall and die even after you are genuinely saved.”

Such people are Juneteenth Christians, they are ignorant of the complete work of freedom, total emancipation by Christ on the cross, they are being fed by doctrines of demons that makes no difference between the saved and unsaved, between saints in Christ and sinners in the world.

When you are genuinely saved in Christ, He sets you free from all sins, addicted sins, from all principalities, powers, curses, evil handwritten, evil forces of witches and wizards; Here is what Bible says about me and you before and after we are saved:

“And you, being dead in your trespasses and the uncircumcision of your flesh, He has made alive together with Him, having forgiven you all trespasses, having wiped out the handwriting of requirements that was against us, which was contrary to us. And He has taken it out of the way, having nailed it to the cross. Having disarmed principalities and powers, He made a public spectacle of them, triumphing over them in it.” Colossians 2:13-15.

YOUR QUESTION?
But why are some Children of God who are serving God in holiness and yet the enemies are troubling their lives?

JESUS’ ANSWER
I was in the boat with My disciples, yet the devil came to trouble it on the sea to the extent that it almost sinks and they were crying in fear. I asked them, “Where is your faith?” So the fact that I’m in the boat of your life, marriage, health, ministry or business does not mean devil will not want to trouble you, but you must command by faith, not cry in fear. When you command in faith, he will flee away but when you begin to cry in fear he will force his will on your life. Where is your faith in Me? Command in My Name!

Do you want to experience total freedom in Jesus Christ? Please click on this link and read on how to be genuinely saved and start new life in Jesus and pray as directed
https://www.facebook.com/notes/revelation-of-truth-evangelical-ministries-rtem/how-to-be-saved-and-start-a-new-life-in-Jesus/270674586372252