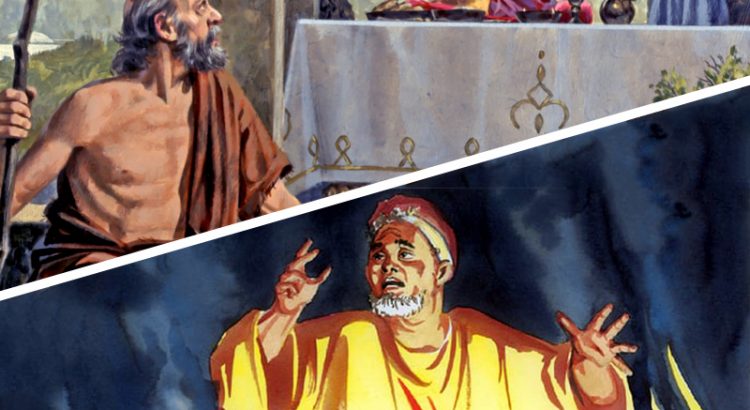 THE RICH MAN AND LAZARUS
LUKE 16:25, “But Abraham said, ‘Son, remember that in your lifetime you received your good things, and likewise Lazarus evil things; but now he is comforted and you are tormented.”

At the end, the rich man found himself in Hell and Lazarus the poor man, found himself in paradise. What a two different eternal destinies!
Father Abraham said about the rich man, that he had received his “good things” while on earth and Lazarus, his evil things while on earth. The question is, “Was is because of the riches this rich man had were the good things that made him to go to hell?” Does it mean riches makes one goes to hell fire? Because the rich man went to hell, does that means every rich man and woman are going to end up in hell fire? And also, “Can we say the poverty of Lazarus were the evil things that earned him paradise?” Does that mean every poor Christian who suffers on earth will automatically go to heaven? The answer to both is NO!

The rich man didn’t go to hell just because he was a rich man, in fact Abraham was a rich man also, and Abraham is in paradise. So riches itself is not a certificate to hell except one get it in a wrong way or one allows the riches to make one behave wrongly. On the other hand, Lazarus didn’t go to paradise simply because he was poor; there are many poor sinners in hell. Being poor is not a certificate to heaven and poverty is not always synonymous to holiness. There Are many sinful poor people and there are many rich godly people.

But then, Abraham said the rich man was in hell because in his lifetime, he received his “good things”. He also said that Lazarus is in paradise because in his lifetime, he received his “evil things”. Both men received their own things in their lifetime, and afterlife, they were rewarded accordingly. We can see that it is what both of them did while living that determined where they went to when they died. Eternity is determined while on earth not after death. There is no prayer you can pray after you die that will change your eternal destination and there is no amount of prayer people pray for you that will change your destiny after death.

THE GOOD THINGS
It’s not wrong for us to have good things on earth, because good things are good as long it is godly. But the “good things” the rich man received while on earth that made him to go to hell were the gain of unrighteousness which made him rich, and also “evil things” Lazarus received were the persecutions and forbearance for righteousness and for the sake of righteousness.

It’s possible for you to be rich through unrighteous means and enjoy your life till you die, as many are forgoing or forgetting righteousness for the sake of riches today. But what will it profit a man if he gains the world and loses his soul? The riches, wealth, opportunities, jobs, contracts, allowances, money, properties, certificates, visas, business connections, positions, votes, positions, profits that you gain through unrighteous means (lying, falsification, malpractices, stealing, bribing, cheating, etc ) are the good things which you received in your lifetime that will qualify you for eternal destruction, to hell at the end of your lifetime on earth.

Any good thing you get through sinful and ungodly means will make you groan in eternity like the rich man. You may gain riches through sinful means, you may gain population in your ministry through prosperity preaching and compromising systems, you may gain power through satanic way and you are enjoying yourself now. The good things which you gained through unrighteous means and made you rich in your lifetime will create your eternal doom and suffering after your lifetime is expired on earth.

You can gain a lot of riches and many good things on earth by ungodly and unrighteous ways and have wonderful time in life, and enjoy yourself to the full, but at the expense of your soul and eternity. Good things like good position, promotion, political power, nice house, beautiful car, easy life and luxurious life; you get what you want, you eat what you want, you drive the car you like, and you travel all over the world. Is that not good and splendid? The Bible said the rich man “was clothed in purple and fine linen and fared sumptuously every day.” What a splendid and sweet life! He was wearing the best designers, and lived the best quality life of his generation. He did a lot of good things to his life and body, but not to his soul. Like this rich man, those who get good things without being godly, will regret at the end.

THE EVIL THINGS
It’s possible to be poor because of righteousness till the person gets to heaven. Lazarus was a child of God and he served God wholeheartedly, but he was poor. What it means is that, it better to remain righteous, uncompromising in Jesus and be poor than to compromise and gain wealth through lying and ungodly means. Everybody may be doing that to get job or wealth, because everybody wants to be rich, but only few will stand for righteousness than unrighteous riches. Proverbs 19:22, “…..And a poor man is better than a liar.”

Does that means Lazarus didn’t know his right in the Lord as many prosperity preachers claim that it is the right of every child of God to be rich? Some preachers even go to the extent of preaching that if you are a poor Christian, you are under curse. But if you check most of their rich members, they are more like this rich man in the Bible. The modern Christianity gospel preaches that it is a must to be rich, but in the Christianity of the Bible, riches are good but not a must, there are only two things Jesus made as under a must for every heavenly minded Christian, and they are holiness and evangelism. Holiness is under a must if you want to see God at the end, because without holiness no man shall see God; and evangelism is a must, in fact Paul said woe is unto him if he failed to preach the Gospel to others.

You claim to be Christian, and you say poverty is not your portion, you have made hell fire you portion already. You lie and you claim poverty is not your portion? Hell is your portion, you bribe, you collect bribes at work, you change figures, you collect salary of work you are not doing, you inflate prices at work, you commit fornication, adultery, masturbation, pornography, you are a trouble maker at home, yet you shout “poverty is no my portion, I want to go to heaven like rich Abraham, not like poor Lazarus” you know what? The devil is preparing a special bedroom for you in hell, except you repent.

THE BLESSINGS OF ABRAHAM
In Christianity today, we claim the blessing of Abraham as a reason for every child of God to be rich, that is great, but the blessings of Abraham is more than the passing riches of this world, Abraham’s blessing was much more than financial blessing and material stuff. Lazarus was a son of Abraham, in fact, when he died, he was right at the bosom of Abraham, yet he was poor on earth. That means Abraham blessings are not physical, they are spiritual blessings – justification in Jesus Christ. God can choose to make any of His children financially rich and He may also choose not.

It’s not a must for the child of God to be rich financially and materially, but it’s a must to be rich towards God. Jesus never promised financial prosperity to His followers, since no place in the Gospel books or throughout the teachings and episodes of the Apostles, and in the book of Revelation that financial or material prosperity was promised to those who follow and serve Christ. Jesus never said, “If you follow me you will be rich and gain the whole world” It is only one person that promises riches if you follow him, and that is the devil. The devil promises fame, riches and earthly power if you follow him so you can lose your soul for eternity in hell. He uses the temporal things of this world to deceive eternal souls.

It’s not a sin for a child of God to be rich, but it’s not a must, as many prosperity, penterascal preachers are claiming. Financial riches and wealth is so minor and additional that a genuine child of God and minister of God will not focus his ministry on it. The priority of a serious minded Christian is to live according to God’s word and fulfill God’s will on earth.

Are you ready to rededicate your life to Jesus now or start a new life? Then repent! Confess all your sins, forsake them all and ask Jesus to forgive, cleanse you and save you. Then it will be well with your soul.