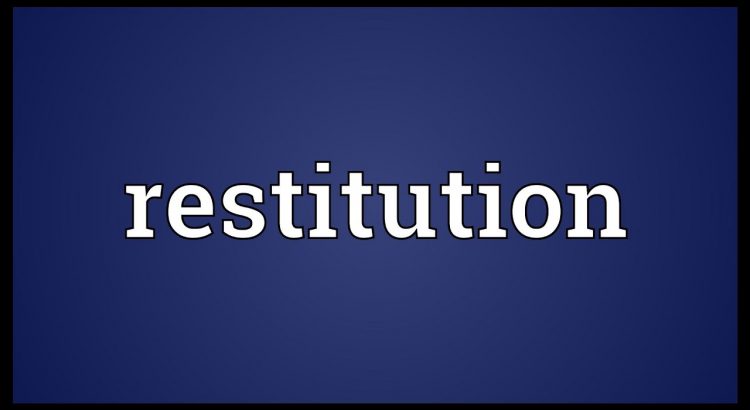 THE BLESSINGS OF RESTITUTION
Judges 17:1-2. Now there was a man from the mountains of Ephraim, whose name was Micah. 2 And he said to his mother, “The eleven hundred shekels of silver that were taken from you, and on which you put a curse, even saying it in my ears—here is the silver with me; I took it.” And his mother said, “May you be blessed by the Lord, my son!

There are many blessings that follow after restitution is done, here are few of them:

Peace with Men
In our past old life, we wronged God and men, when we are saved, we make peace with God and so we must complete the process of peace by making peace with people. People we fought, we offended or people we are owing before we were saved must be contacted and apologized to. People we had rancor, malice and animosity with must be settled with, even if we think they wronged us, even if we have decided not to greet them again, yet we must make peace with them for the sake of peace and to remove the bitterness, malice and others so that we don’t give room to the devil in our new lives in Christ. “If it is possible, as much as depends on you, live peaceably with all men” Romans 12:18.

People you are living with, working with, schooling with; family members, friends and neighbors, every one we had issues with, as much as we can, we should settle peacefully with them.

When we make peace with all men, both right and wrong, it confirms our peace with God, it gives us peace and it’s the only way to see God, to enter heaven. “Pursue peace with all people, and holiness, without which no one will see the Lord” Hebrews 12:14. When we settle with people peacefully, it shows we are truly children of God the King of Peace; Jesus the Prince of Peace and we, the children of peace. “Blessed are the peacemakers, for they shall be called sons of God.” Matthew 5:9.

It Settles Old Accounts
Restitution is to settle our old accounts and close them. If you are saved and you have not made some past wrongs right by restitution, it simply means you keep your old account open which may stand against you here on earth and eventually disallow you to enter heaven. Undone restitution has the capacity to block God’s blessing in your life here on earth and block you from entering Heaven. The old records which stand against you can only be settled and closed by restitution. People you cheated in the past must be contacted and settled with. Things you forcefully collected before you gave your life to Jesus is your old account and must be settled after you are saved.

It confirms your new life in Jesus Christ
In different online and phone transaction, after you have sent your desired transaction, you will be asked to confirm your transaction. If you fail to “just” confirm, thinking since you have filled all the forms, supplied all the needed information and it has been sent and accepted, you feel confirming again is of no use, your transaction will be invalid and will not be processed. The same is in reality with restitution. After you have repented and confessed your sin to God and He has forgiven, cleansed and accepted you, you need to respond back to confirm your salvation by restitution. Think about it, if I were your neighbor and I stole your stuffs in past and using them. You knew and just kept quiet, then later I got saved and come to preach to you and still using what I stole from you, how will you feel? You would see such Christian as fake. That I how important restitution is.

It turns curses to blessings
Many curses in life are caused by wrong things that we did in past, and many problems facing children of God after they have been saved are not because the enemies are powerful over their lives in Christ but because they allow the old curses to have access to their new lives because of ignoring necessary restitutions they need to do. Many battles Christians are fighting that make them have sleepless nights and continue to run from mountain to valley may be as a result of unsettled restitution. That is the reason many Christians wrongly concluded that salvation in Christ does not end spiritual battles of enemies, yes if you ignore restitution, even after you are saved, you may still be exposed to curses.

Undone restitution allows the unsettled wrong of your past to haunt your present life even though you are now a child of God. You give access to Satan, enemies, generational curses and many attacks when you refuse to do needed restitution. This can also block the free flow of God’s blessing, progress and God’s promises for your life. Undone restitution gives Satan stand to accuse you and oppose you in the present of God. Most of the problems making us to do fasting, special prayers, deliverances and attend several programs and the problems remain the same; those problems can be solved if we do simple acts of apologizing, forgiving or any necessary restitutions as the case may be, and that will end the mountainous problems, and open doors to progress and prosperity in your life, marriage and ministry. “And he said to his mother, “The eleven hundred shekels of silver that were taken from you, and on which you put a curse, even saying it in my ears—here is the silver with me; I took it.” And his mother said, “May you be blessed by the Lord, my son!” Judges 17:2

It Gives Blessed Assurance
When restitution is settled, you have peace, you have more confidence in the Lord and you have assurance of heaven. Satan will not have anything holding against you and you have that strong boldness in your prayer. Here is what the Word of God says, “And by this we know that we are of the truth, and shall assure our hearts before Him. For if our heart condemns us, God is greater than our heart, and knows all things. Beloved, if our heart does not condemn us, we have confidence toward God. And whatever we ask we receive from Him, because we keep His commandments and do those things that are pleasing in His sight.” 1 John 3:19-22.

Do you know that refusing to do the necessary restitution hinders prayer of healing? The Bible says, “Confess your trespasses to one another, and pray for one another, that you may be healed. The effective, [k]fervent prayer of a righteous man avails much.” James 5:16.

WRONG NOTIONS ABOUT RESTITUTION
So many Christians and pastors, especially these modern day pastors and lost ministers, do not have the biblical understanding of God’s command about restitution, they see it as unnecessary and they teach just that. They say when you are saved, God forgives your sins and that settle all without restitution. What that mean is that you can keep using what you stole before you were saved, you can keep covering the evil you did before you were saved, but the truth is that Christians who believe such will not want people to do so to them. They will not want their husbands who left them with children for strange women to continue staying with the strange women after the husbands are saved; they will want the husbands to return. Pastors who say restitution is of no use will not want their wives to continue keeping secrets from them even after their wives are saved. Christians who disagree with restitution will not want the thieves who stole their only cars or life’s precious belongings to keep them after the thieves are saved; they will definitely want the thieves to return them, they might even be praying that God should touch their hearts.

If a dubious person ganged against you and used his influence to claim your developing housing property which you have spent all your hard earned money to build, after the dubious person is saved, wouldn’t you expect him to come to you, at least to apologize?

Restitution is infallible truth of Christianity that cannot be biblically or humanly denied, it is soul depravity and self-deception that make “so called” preachers to ignore or deny restitution after salvation. If you go to such people for counsel, they will counsel you wrongly and cancel your life. Such preachers can tell you to just forget about it since God has forgiven you, they may tell you to fast and forget about it, they may tell you to give special offerings, sow into their ministries and God will pardon you. But the truth is that there is no substitution for restitution expects to do restitution after salvation.

Restitution is biblical command to the saved children of God, it’s not an option.